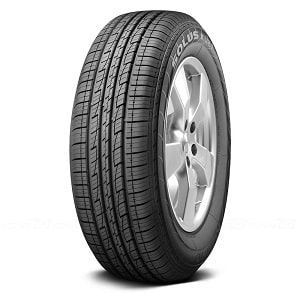 Choosing a set of tires for your modern crossover or SUV vehicle is becoming more difficult with all the options available on the market. Due to the popularity of these vehicles, tire manufacturers tend to develop several tire lines for the same cars, that often overlap with each other. Take the Kumho Solus KL21 for example – it is similar to the KL33 Premium, albeit available in fewer configurations and sizes, and at a somewhat lower price point. Other qualities it has are pretty identical to its brother – it’s an all-season touring tire made for drivers who want a combination of performance, comfort, and durability. But, is it any good? You can find out in this detailed Kumho Solus KL21 Review.

The Solus KL21 is often installed as an OEM tire of choice on vehicles from Kia and Hyundai, such as the Kia Sorento for example. This means that it is a great choice for drivers of competing vehicles, such as Honda Pilot and CR-V, Toyota Highlander and RAV4, Hyundai Santa Fe and Tucson, Ford Edge, Subaru Forester and Outback, Lexus RX350 and RX400h, BMW X3, etc. According to Kumho, the KL21 can also be installed on prestigious looking pickups, which means that they also focused on design. More importantly, Kumho promises all-year traction and safe driving experience, and also low rolling resistance capabilities.

The thing is, popular premium manufacturers, such as Michelin, Bridgestone, and Continental, already have tires in this category that serve the same function, albeit with much better results in several key categories. The Solus KL21 is not a bad tire by any stretch of the imagination, but it is also not the best in its class. What it is, though, is a nice budget choice for owners who don’t plan on spending a fortune for a set of four tires. The Kumho still has its qualities and offers a generally rewarding driving experience.

The Kumho Solus KL21 is an all-season touring tire, which means that it should be a great choice for most crossover and SUV owners that use their vehicles to transport their families in urban areas, and also for long road trips on the weekend. Kumho had several key areas that they wanted to cover with this tire, with low rolling resistance being one of the main things on their minds. According to Kumho’s testing, their proprietary Low Rolling Resistance (LRR) technology with high dispersion silica (HDS) that strengthens the molecular structure of the rubber improves fuel consumption by 5%. 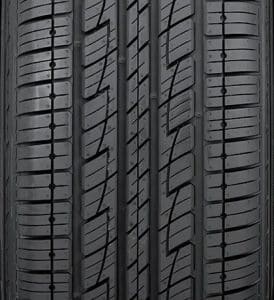 However, this “Eco” technology that saves fuel on the pump is only available in 17-inch models, and 225/55R18 model – bigger tires don’t offer low rolling resistance, so you won’t save at the fuel pump. This is a shame – some competitors provide the same technology even on bigger tires. Still, those that have compact crossovers with smaller rims should see significantly reduced fuel consumption and CO2 emissions. The eco-friendly design from Kumho also generates less rubber dust particles from the tire itself, without sacrificing other performance attributes. It’s good to know that somebody really cares about the environment and I applaud this!

On top of that, the Solus KL21 was also designed to offer supreme comfort on the road. According to Kumho, this tire combines excellent ride comfort and low noise on the highway and offers a luxurious driving experience. The KL21 also comes with anti-abrasion carbon black technology with HDS. This tech improves wear resistance and maintains high traction capability in both wet and dry conditions for better gas mileage, performance, and comfort.

The Kumho Solus KL21 is available in sizes ranging from 17-20 inches, covering a lot of modern crossovers, SUVs and pickup trucks.

Like most Kumho tires, you can expect the KL21 to be durable, especially when it comes to tread wear. The manufacturer offers 6 Years / 60,000 Miles treadwear warranty, which is good for the price (you can get more from premium tires). I couldn’t test the Kumho to this number (duh), but from what I can see online, users are generally delighted with the performance in this area. You can expect around 40,000 carefree miles with a set of these tires, especially if you rotate them every six months.

While I expected the Kumho Solus KL21 to be useful in dry conditions, I was still pleasantly surprised by the performance it offers. Traction is on a very high level, even on powerful premium crossovers and SUVs. Acceleration is mostly smooth, with limited tire squeal. Braking is also outstanding, on par with the best tires in the category.

On top of that, the Solus KL21 is also very responsive in the corners, something that you don’t often associate with touring tires. The grip is very good, even at higher speeds, while the Kumho also handles high-speed stability with aplomb. Thanks to its advanced compound, the Kumho Solus KL21 works in warm and cold temperatures, with little to no degradation of grip and traction in the winter.

The symmetric “bamboo” tread design of the Solus KL21 offers good resistance from hydroplaning, almost on the level of the best premium tires. Traction on damp surfaces is also very good. Sure, you can find better tires for wet weather, namely from Michelin or Continental, but for the price, the Kumho still offers a reliable and safe driving experience. Interestingly, the Solus KL21 is better than its close relative the Crugen KL33 Premium in wet conditions, which makes it a much safer option.

Even though it is marketed as light-snow tire, the Solus KL21 doesn’t offer reliable performance in the winter. The traction it provides is limited, and braking performance leaves a lot to be desired. To be fair, not a lot of all-season tires offer reliable snow traction, so I wouldn’t call this a negative to the Kumho. If you live in areas with harsh winters, you should replace your all-season or summer tires with winter tires anyway.

This is the area where most Kumho tires usually score high points, and the Solus KL21 is undoubtedly one of them. I couldn’t find any issue with noise, even at speeds that exceed 70mph, while the ride is generally pleasing and smooth. Due to these qualities, the Solus KL21 is an excellent choice for crossover and SUV owners that use their vehicles for long road trips, and especially for owners of premium vehicles from Lexus, BMW, and Mercedes-Benz.

The Kumho Solus KL21 is an all-season touring tire that offers reliable performance in almost every category. It is safe in dry and wet conditions, responsive in the corners, stable at higher speeds, and supremely comfortable. The price is also budget-friendly – another great positive for the Kumho. Overall, a great tire for the money!

Sebastian Blanco
Sebastian Blanco has been writing about electric vehicles, hybrids, and hydrogen cars since 2006. His articles and car reviews have appeared in the New York Times, Automotive News, Reuters, SAE, Autoblog, InsideEVs, Trucks.com, Car Talk, and other outlets. His first green-car media event was the launch of the Tesla Roadster, and since then he has been tracking the shift away from gasoline-powered vehicles and discovering the new technology's importance not just for the auto industry, but for the world as a whole. Throw in the recent shift to autonomous vehicles, and there are more interesting changes happening now than most people can wrap their heads around. You can find him on Twitter or, on good days, behind the wheel of a new EV.